⚠️ Coronavirus Note
Due to the COVID-19 pandemic, in-person meetings may have been canceled or moved online. Please contact your local meeting organizers before visiting an in-person meeting to confirm.
See our List of Online Meetings

Some of the panel discussions have been recorded and are available as podcasts.
Please visit the Podcasts page for more formats. 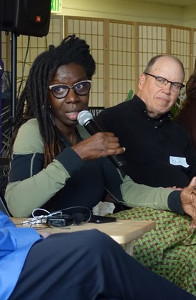 The Buddhist Recovery Network co-sponsored a recent Regional Buddhist Recovery Summit graciously hosted by the East Bay Meditation Center (EBMC) in Oakland, California on February 17. The one-day summit featured three different styles of Buddhist recovery meetings for participants to choose from to start the day, including 8 Step Recovery, Refuge Recovery, and Heart of Recovery meetings. Next, the audience of about 60 people had an opportunity to hear two different panel discussions—one in the morning and another in the afternoon. The overarching theme for the day was “Let’s talk about 12 Step Programs and Buddhist Recovery.”

Shahara Godfrey served as moderator for the first panel discussion, which featured: Laura Burges (from the San Francisco Zen Center’s longstanding Meditation in Recovery group), George Gomez (from Heart of Recovery in Los Angeles), Vimalasara Mason-John (co-founder of 8 Step Recovery from Vancouver, BC), Kevin Griffin (One Breath at a Time: Buddhism and the Twelve Steps author from Berkeley), Father Tom W. (12 Step Program speaker and Jesuit priest from Oakland), and Enrique Collazo (from Refuge Recovery in Oakland).

To begin the first panel, each panelist gave a short introduction of their recovery background and then addressed the theme for the day. Kevin Griffin framed it well, saying, “I think that a lot of my interest is in the way that Buddhism can talk to the (12) Steps and… the Steps can talk to Buddhism. For me, it’s really important to have that be a two-way conversation. A lot of the time, when people see those two things, they figure that it’s about Buddhism telling you how to do the Steps, but I think… the 12 Steps have something to offer to Buddhism, particularly in the sense that addiction is the full blooming of what the Buddha talked about as suffering and the cause of suffering. And we (addicts) understand the Four Noble Truths in a way that people who are intellectually drawn to Buddhism… maybe don’t allow themselves to feel the dukkha (suffering) that we understand.” 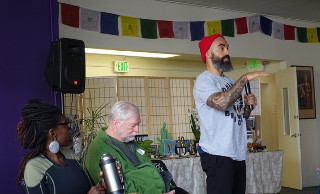 Vimalasara followed this up with the following statement: “For me, Buddhism is the earliest recovery program that we know—(created) 2,600 years ago.” We were off to a good start at that point. All of the speakers contributed unique, thoughtful and valuable input. 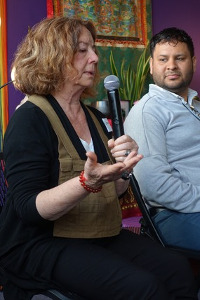 As the panel discussion continued, Shahara asked a question about mentoring or sponsorship. Father Tom W. jumped right in, noting that he had had the same sponsor for 40 years. “He’s always been kind,” he said. “He shares his experience.” Father Tom added that he was also guided by a principle they taught him in his priest training: “Pray for the grace to know when you’re in over your head.”

Offering a different take on traditional recovery language, during the second panel Jean Tuller told the group about how in Refuge Recovery they do not talk about “disease” in the context of alcoholism and addiction. Instead, she said, they speak about “causes and conditions” which is a fundamental Buddhist tenet.

“Relinquishing the disease model has been huge, I think, for many folks in Refuge (Recovery),” Jean said. “We take that language out… We are people, and we have things going on… we have to deal with those things, and we have to deal with those things in a structured fashion to move through them.” This was just one viewpoint on this subject for the day, but it perhaps hinted at a way Buddhist Recovery can begin to contribute to new understandings about how to treat addiction in mainstream society.