⚠️ Coronavirus Note
Due to the COVID-19 pandemic, in-person meetings may have been canceled or moved online. Please contact your local meeting organizers before visiting an in-person meeting to confirm.
See our List of Online Meetings 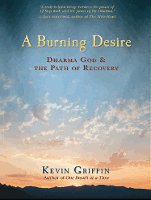 “A Burning Desire: Dharma God and the Path of Recovery”

Order this book online at Amazon

Order this book online at Amazon

The Buddhist Recovery Network does not officially endorse any of the book reviews that appear on this site. They are private viewpoints that may or may not represent the views of the organisation or its members. Readers are free to submit book reviews for publication on this site via the link below.

This book has been long needed in the growing literature of addiction and recovery. Why?
This reviewer is an openly recovering alcoholic, Buddhist practioner and religious professional. I have similar challenges with the traditional 12-step model that Kevin Griffin notes in his second, tightly structured book on Buddhism and the 12 Step programs. He speaks directly to people like me who struggle with the traditional God language of AA and other 12-step programs: “…I want to address the neo-atheists and suggest that in throwing out the bathwater of magical, blind-faith-based religious beliefs, they may have also thrown out the baby of authentic spirituality, a spirituality that is in complete harmony with a rational, scientific viewpoint. ” Strong words and a stirring effort right at the start of the book.
Kevin Griffin then proceeds to explore the concept and the feeling of Higher Power through the lenses of Buddhist teachings: Karma, Mindfulness, Love, Spiritual Awakening, and so on. This may seem faintly heretical to traditional folk in the 12-Step community but how many times in meetings do we hear that our concept of Higher Power could be the door knob or the sunrise on a sober morning? And of course there’s the Higher Power of the Group, the people who come to meetings and share their stories so we can nod and realize we aren’t unique and alone. Were I to have any criticism of Kevin’s book, I would have suggested that Higher Power of the Group be the start of Part I (Dharma God) and then move through the Buddhist sketches of Higher Power through the lenses of Eightfold Path, Love and on forth. Those who are exploring dharma teachings for the first time would then be on familiar ground with ‘Higher Power as Group’ right away.
The second section called “The Path of Recovery” is an essential continuation of the first section. Dharma God and Higher Power become transformed into actual Step work. Rather than leave the reader with the chapters on Higher Power with handy meditations at the end of each chapter, Kevin moves us into a pragmatic usage of the forms of Higher Power in each chapter on the Path to Recovery. It might have been still more helpful to readers had each chapter of Path to Recovery had some questions to ponder at the end. However, each chapter that speaks to step work has an artfully woven connection between Kevin’s own story and how we can translate Higher Power and God into more universal teachings.
One question that I wonder is whether this book would be useful to the non-Buddhist in recovery or who wants to help others. People have expressed to me that his first book (One Breath at a Time: Buddhism and the 12 Steps) had wide ranging auto-biographical stories that were very helpful to them. They reminded people of the stories they’d hear in 12-Step meetings. Even if the flow of stories ambled just a bit, there was much to chew on. This second book is very tightly written and focused while keeping the important humanity and humility of the first book. In this reviewer’s opinion, the book still can speak to the curiosity of the non-Buddhist or to one who wants alternatives to traditional understandings of “God As You Understand Him” and Higher Power. The chapters particularly of “Higher Power of Love” and “Higher Power of Spiritual Awakening” along with “Higher Power of Group” might well have universal appeal to anyone whether they are neo-atheist, agnostic, or simply call themselves spiritual but not religious.
This is a vital book for the emerging dharma of recovery in the West and it surely will lead to even more gifts to all of us who seek and who are willing to have our comfort zones of conformity dropped away.

I recall a funny evening in 2009 at the Buddhist Recovery Network Conference in Los Angeles where Noah Levine was amusing himself by gently roasting Kevin over the forthcoming publication of this book. There was much chuckling in the audience as Noah said that while he thought the book would undoubtedly help many people, it could be argued that Kevin was singlehandedly trying to undo all the good work the Buddha had done dispelling notions of God, something to which he had devoted an entire incarnation. While acknowledging that Kevin’s approach was far more likely to get him on an Oprah style talk show, and that even the Easter Bunny can be a source of strength, comfort and hope to people, it rather grated on his atheistic sensibilities. Having now (eventually — sorry Kevin) read the book, I am convinced of the importance and necessity of the whole project Kevin has undertaken here. For someone like Kevin who is focusing on the intersection of Buddhism and 12 Step Recovery it would actually be a big problem not to address the relationship between Higher Power and Buddhism, and how Higher Power can be understood in a Buddhist context. I have always been a huge fan of One Breath at a Time, and A Burning Desire is written in the same accessible way, interlaced with personal anecdote and colloquial language. There is no question in my mind that those new to Buddhism and Recovery who are struggling with notions of Higher Power would benefit enormously from reading this book.

To have a review of this book considered for publication, please email it to contact at buddhistrecovery dot org